Important Dates for the November 2, 2021 Election

“When women vote, they change the conversation.”

AAUW’s 2020 Gender Policy Agenda describes expanding and protecting the right to vote as a foundational right.

Click here for 2020 Election Information, including key dates and changes to voting rules.

For more than 100 years, AAUW has taken strong positions on issues affecting women and families. AAUW is involved on both a Federal and State level on issues concerning the following: Education, Pay Equity, Reproductive rights, Welfare, Social Security, Title IX, Civil Rights, and many more issues that impact AAUW’s mission. AAUW on the federal level has a federal lobby corps made up of volunteer members from Virginia, Maryland and Delaware that visit Legislators on Capital Hill every Thursday while the Congress in Session. On the State level, we have a State Lobbyist and a VP of Public Policy. On a weekly basis they attend the Women’s Roundtable at the Virginia General Assembly and lobby on behalf of our Virginia AAUW members.

Members of our branch work every year to get the Equal Rights Amendment ratified by lobbying at the General Assembly, and this year IT HAPPENED.   On January 27, 2020, with a bipartisan vote, the General Assembly of Virginia ratified the Equal Rights Amendment.  The Senate approved the House’s ratification resolution by a vote of 27 to 12, and the House approved the identical Senate resolution by a vote of 58 to 40.

In support of his position, the Archivist relies on an opinion issued by the Office of Legal Counsel, U.S. Department of Justice.  The OLC’s memorandum, released the first day of Session 2020, opines that the amendment was no longer before the states and that Congress lacks the power to revive the amendment.

On June 29, 2020, GRAAUW, AAUW of Virginia, AAUW of Illinois, and AAUW of Nevada, joined by 18 other groups, filed an amicus brief in support of the Attorney Generals of Virginia, Illinois, and Nevada in their lawsuit against the National Archivist.

The lawsuit, Virginia v. Ferriero, Case No. 1:20-cv-000242, pending in the United States District Court for the District of Columbia, seeks to obtain a court order requiring the Archivist to publish the Twenty-Eighth Amendment (aka, the “Equal Rights Amendment”) to the Constitution along with certification of the 38 states’ ratifications.

In its brief, GRAAUW argued that the Plaintiff States have standing as representatives of their residents to seek enforcement of States’ ratification rights under Article V of the U.S. Constitution.

Backstory: The ERA was first introduced in Congress in 1923 and was reintroduced every year until its passage in 1972. The proposed constitutional amendment required three-fifths of all states to ratify the amendment before fully implementing the ERA. State legislatures were given until 1979 to ratify the amendment, and Congress later extended the ratification deadline to 1982. By the time the final deadline passed in 1982, 35 states approved the ERA, three states short of ratification. Nevada, Illinois, and Virginia have now ratified the ERA. 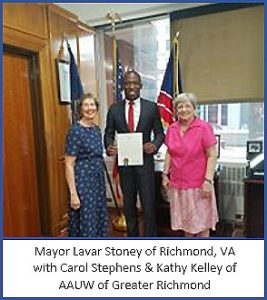 Pay Equity is one of AAUW’s Public Policy most important Issues.  The Simple Truth about the Gender Pay Gap  succinctly addresses these issues by going beyond the widely reported 80 percent statistic. The report explains the pay gap in the United States; how it affects women of all ages, races, and education levels; and what you can do to close it.

The mayor of Richmond, Lavar Stoney signed a proclamation and promised to support our efforts to close the pay gap in city government.

We also help college students learn how to negotiate for higher salaries. Learn more about these workshops at:  AAUW National Salary Page

Several of our members reach out to the public at public places and events to register them to vote. If they are already registered we answer questions such as how to change their address etc.  Everything you need to know about an upcoming election can be found at: http://www.vote411.org/

We help OneVirginia2021 advocate for fair redistricting in the Virginia.  We help them organize through local, regional, and statewide efforts to prevent gerrymandering by partnering with them to raise awareness, provide information and work with legislators to implement meaningful reform.